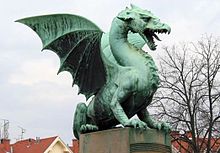 The “Ljubljana Dragon” in Ljubljana, Slovenia

An old dragon of yore, born of a great one

The great ones of yesteryear, a fable to many

Great ones were plenty, in the times of old

Great ones were power, great ones served a greater One still

The great ones are no more

They vanished after the flood

The flood that washed away the evil

Evil of men, and not of dragons

The great ones served the Lord Most High

Roaming the earth at His command

Keeping order and watching over the kingdom

The humans served the One, at one time

Man began to serve himself, and not the One

The evil ones began to hunt and kill the great ones

The One was displeased that His creation in His image

Was now turning to evil, evil deeds and showing no repentance

Man was destroying the watchers, great ones they were

Humans were removed from the Garden, for doing wrong

“Will they never learn? What must I do, that they will turn from their evil ways”, said the Lord

The flood was brought about, and man was mostly gone

The few that remained served the One

The great ones were gone as well, never to be seen

The dragons of yore did show

Born of the great ones, lesser but mighty still

Soaring through the skies, keeping aloof

Dragons of yore had none to fear, none but man that is

Soon the dragons of yore, were almost no more

Seen in the sky, soaring overhead

There are a few, dragons of yore

Seen on occasion, in the night against the moon

A wonder to behold, a dragon of yore

Related articles  Chief of the least–Dragons Are Real, Parents Are Stupid