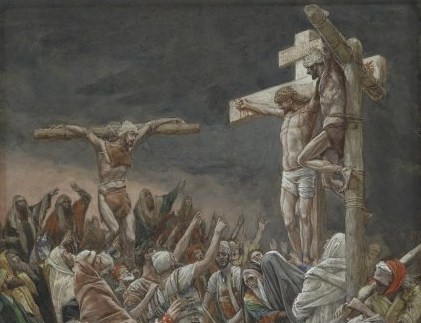 By Jerry Newcombe, D.Min.
3/28/18
What are Good Friday and Easter all about? In a sentence: Jesus was rejected that we might be accepted.
When I was a child, I attended a parochial grade school where there was an in group, and there was an out group. I was always in the out-group. Sports were the end-all-be-all. And I was lousy in sports.
I hated it during gym class, where they would choose two people as team captains; and then those captains would choose players, one at a time, for their team. And virtually every time I was chosen last.
I felt like I was on the outside looking in. Never fully accepted. That’s hard for a child to get over.
There was a sad story I read about last month that occurred in a poor Denver neighborhood. A lady playing Elsa from Frozen came to a little 7-year-old girl’s birthday party. Only there were no other children there. The Elsa character did much to try and smooth over the hurt feelings. Obviously, something went terribly wrong in this scenario. In any event, the little girl experienced rejection.
But Jesus experienced incredible rejection that seemed to have no end:

“Behold and see if there be any sorrow like unto His sorrow.” So goes one of the arias in Handel’s Messiah, speaking precisely about Jesus and Him crucified.
But this wasn’t pointless suffering. There was a grand purpose to it. God made Him who knew no sin to become sin for us, for our sake, that those who believe in Him might become the righteousness of God.
God rejected Jesus so that those who believe in Jesus will be accepted by Him. Not because we’re good, but because He paid the price for the sins of those who believe in Him.
Because Jesus endured Hell for us, we can enjoy Heaven. Because He descended into Hell for us on the cross, we can ascend into Heaven.
Borrowing from St. Francis’ prayer:

Jesus was rejected so we don’t have to be.
Fade to black. Fast forward to early Sunday morning.
Something happened that has changed the world. Your own birth-year is marked in reference to Jesus’ birth because of what happened next.
He arose. He conquered the grave, thus sealing the deal. It is finished. He overcame death and is alive forevermore. Now, He has been accepted by His Father. Now we can be accepted when we trust in Him for salvation and repent of our sins.
The crucifixion and resurrection of Jesus are the events that changed the world. Even when an atheist sleeps in on any Sunday morning, he is paying indirect homage to the fact that Jesus rose again on Sunday, which is why, virtually the world over, Sunday is a day off. To worship the risen Christ.
Newsweek magazine is not always friendly to Christianity. Yet in a cover story almost 20 years ago, called “2000 Years of Jesus” (3/29/99), Kenneth Woodward wrote: “[N]early a third of the world’s population claims to be his followers. But by any secular standard, Jesus is also the dominant figure of Western culture. Like the millennium itself, much of what we now think of as Western ideas, inventions and values finds its source of inspiration in the religion that worships God in his name. art and science, the self and society, politics and economics, marriage and the family, right and wrong, body and soul—all have been touched and often radically transformed by Christian influence.”
He is risen. He is risen indeed.

###
Jerry Newcombe, D.Min., is an on-air host/senior producer for D. James Kennedy Ministries. He has written/co-written 29 books, e.g., The Unstoppable Jesus Christ, Doubting Thomas(w/ Mark Beliles, on Jefferson), and What If Jesus Had Never Been Born? (w/ D. James Kennedy) & the bestseller, George Washington’s Sacred Fire (w/ Peter Lillback)   djkm.org  @newcombejerry
www.jerrynewcombe.com
Dr. Jerry Newcombe serves as the senior producer and as an on-air host and a columnist for D. James Kennedy Ministries. Jerry has produced or co-produced more than 60 one hour television specials that have aired nationwide. Jerry is the author or co-author of twenty-six books, at least two of which have been bestsellers, George Washington’s Sacred Fire (with Dr. Peter Lillback) and What If Jesus Had Never Been Born? (with Dr. Kennedy) . Jerry has also written Doubting Thomas? The Life and Legacy of Thomas Jefferson (with Mark Beliles). Jerry has appeared on numerous talk shows as a guest, including Politically Incorrect with Bill Maher (4x), Janet Parshall’s America, Point of View, the Moody radio network, TBN, the Fox News Channel, the Fox Business Channel, C-Span2’s “Book Notes,” etc. Jerry hosts a weekly radio program called “Vocal Point” on GraceNetRadio (www.GraceNetRadio.com), which airs four times each day with new interviews added on Thursdays
Republished with permission The Olive Branch Report

Like Loading...
0
SHARES
ShareTweetPin It
WhatsappDiggLinkedinRedditStumbleuponPrintBufferPocketTumblrMailYummlyFlipboard
‹ Easter Special: How Jesus might look back at the Cross
Anytime you think about making a questionable decision – think twice (Steve Smith Australian Ex Cricket Captain) ›